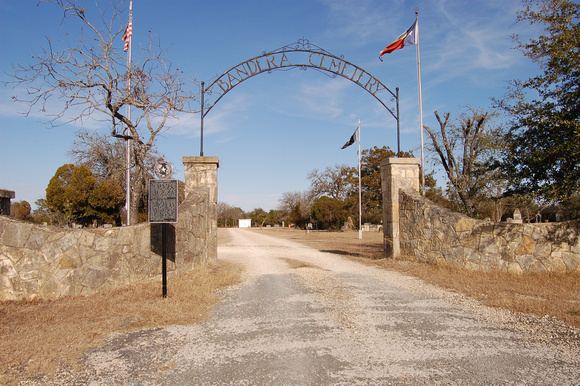 Text: The Bandera Cemetery has served the town of Bandera since the 1850s. The site's oldest burial dates to 1851, before the town's establishment several years later. Many former community leaders of the area are buried in the cemetery. In addition, there are a number of veterans interred here, some involved in military conflicts dating to the Mexican American War (1846-1848) and earlier. Members of fraternal organizations are also among those represented here.

Ownership of the land can be traced back to Hendrick Arnold, a free African American who was a guide and spy suring the Texas Revolution. He joined the revolt with his father-in-law, Erastus (Deaf) Smith, who led the celebrated spy company of which Arnold was part. After several transactions over the years, the section of Arnold's land which became the burial ground was deeded to the Bandera Cemetery Association, which seven women organized in 1907. Today, the burial ground continues to serve the community as an active cemetery and remains an important part of Bandera's history.
Andrew Butler Photos
Powered by ZENFOLIO User Agreement
Cancel
Continue