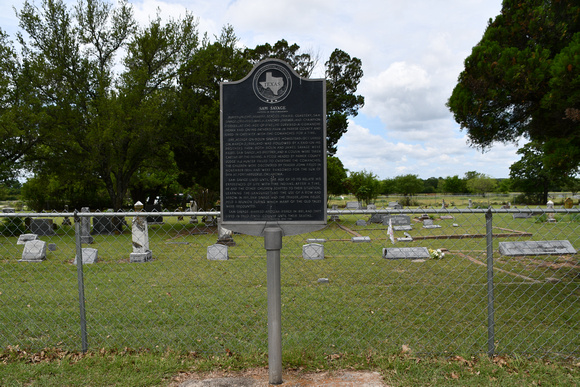 Sam Savage, Captive of the Comanches

Text: Buried in the nearby Staggs Prairie Cemetery, Sam Savage (1861-1951) was a rancher, farmer, and champion fiddler. At the age of five, he survived a Comanche Indian raid on his father's farm in Parker County and lived in captivity with the Comanches for a time. The attack on Bolin Savage's homestead occurred on March 2, 1866, and was followed by a raid on his brother's farm. Both Bolin and James Savage were killed. Sam Savage, his brother, and a cousin were taken captive by the Indians. A posse headed by Parker County Judge A. J. Hunter failed to overtake the Comanches. The children were discovered by trader John Fields in November 1866 and were ransomed for the sum of $414 at Fort Arbuckle, Oklahoma. Sam Savage lived until the age of 90 to relate his experiences of life with the Indians. After a time, he and the other children adapted to their situation, learning the language and the use of a bow and arrow. In 1911, Sam Savage and the trader, John Fields, held a reunion during which many of the old tales were recounted. Sam Savage married Arizona Pierce in 1881, and they lived in Palo Pinto County until their deaths.