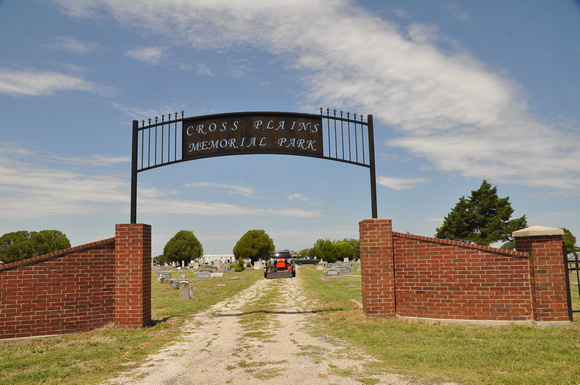 Cross Plains
Callahan County, Texas
32 07.458' N 99 10.187' W
Directions: Start at the intersection of 7th Street and Chestnut Street. The cemetery is on the west side of the intersection.

Historical Marker: Situated on a flat area near the edge of town, the Cross Plains Cemetery is the final resting place for the town's key leaders and families. The land, originally granted to James Knight, one of Stephen F. Austin's original colonists, for service in the Mexican-American War, passed to several absentee landowners. The first burial was the son of Uncle Johnnie Lard (Laird) in 1882. In 1905, Thomas F. Steele and his sister, Annie Parsons (Steele) Eager, deeded the land to cemetery trustees. Many military veterans are buried here, along with all of the original cemetery trustees, Cross Plains' first mayor, John A. Wagner, and members of numerous fraternal organizations.
Andrew Butler Photos
Powered by ZENFOLIO User Agreement
Cancel
Continue