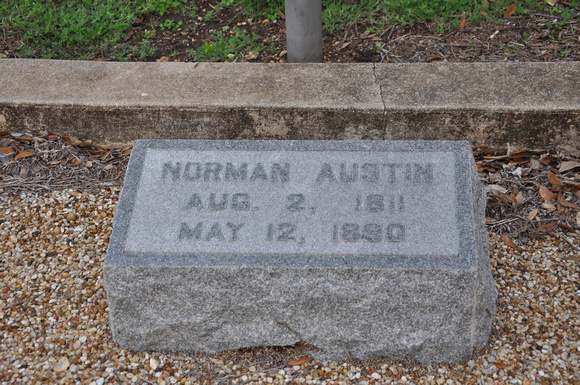 Historical Marker: Texas revolutionary veteran and local merchant Norman Austin made important contributions to his adopted state. Born in Skaneateles, New York, he was the fifth son of a large family and travelled widely throughout his life. He farmed in Michigan and clerked in Alabama before arriving in Matagorda County, Texas to ranch in 1835. At the beginning of Texas' War for Independence from Mexico, Austin joined Albert C. Horton's cavalry. Assigned to Colonel James Fannin's command at Goliad. On March 17, 1836, Austin participated in battle near Goliad between Horton's Calvary and the advance guard of Mexican General Jose De Urrea. The following day, Horton's men went ahead of Fannin's main army to scout forward positions. The Mexican Army surrounded Fannin's men near Coleto Creek, capturing and later executing more than 300; Austin was among 28 survivors in Horton's Unit. Austin traveled again after the war, visiting his recently widowed mother in New York and then moving to Mississippi, where he met and married Eliza Ann Houston. They also lived in Indiana before settling in Texas in 1854, first at Onion Creek (Travis Co.) and then at Taylor's Valley east of Belton where they built a double log cabin. Austin opened a dry goods and hardware store in Belton, bringing supplies form Houston by oxcart. One of Norman and Eliza's sons served in the Confederate Army, and later the family lived in Mexico, Costa Rica and California before returning to Belton a final time in 1872. Austin continued in the dry goods business until his death, and was as active member of the Texas Veterans Association, comprised of military veterans of the Republic of Texas.
Andrew Butler Photos
Powered by ZENFOLIO User Agreement
Cancel
Continue