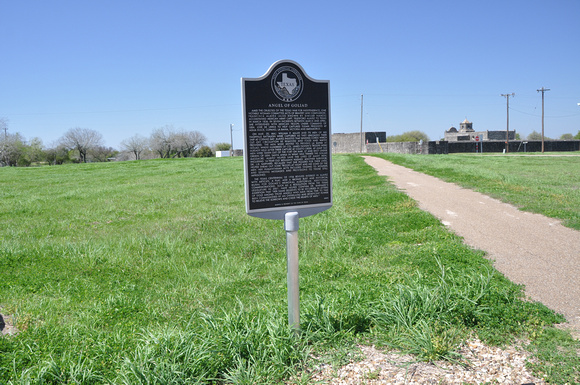 Historical Marker: Amid the cruelties of the Texas War for Independence, one notable woman committed acts of bravery and compassion. Francisca Alavez (also known by similar names) accompanied Mexican Army Captain Telesforo Alavez to Texas in March 1836. In seven incidents between March and April, she intervened with Mexican troops under command of Gen. José de Urrea to help captured Texian prisoners at Agua Dulce, Copano, La Bahía, Victoria and Matamoros. On Mar. 20, Maj. William P. Miller and 75 men of his Nashville Battalion were captured as they unloaded their ship at Copano Bay. Alavez insisted that binding cords which cut off circulation be removed and food and water be provided. The men were moved to Presidio La Bahía at Goliad, where hundreds of Col. James Fannin's troops were already held after their capture at Coleto Creek. At least 342 men were taken out of the fort on Mar. 27 and shot under orders of Gen. Santa Anna in what was termed the Goliad Massacre. Alavez helped save the lives of many men, including 16-year-old Benjamin Hughes. Another survivor, Dr. J.H. Barnard, recalled that she pleaded for their lives, helped sneak out some troops at night and hid some of the men. Her humanitarian acts included tending to wounds and sending messages and provisions to those still imprisoned.The Texas Centennial of 1936 revived interest in Alavez with articles, a play, and a bronze bust and historical mural for Goliad's Memorial Auditorium. Additional commemorations, such as a resolution from the Texas Legislature in 2001, have helped confirm Dr. Barnard's assertion that "her name deserves to be recorded in letters of gold among those angels who have from time to time been commissioned by an overruling and beneficent power to relieve the sorrows and cheer the hearts of men.
Andrew Butler Photos
Powered by ZENFOLIO User Agreement
Cancel
Continue