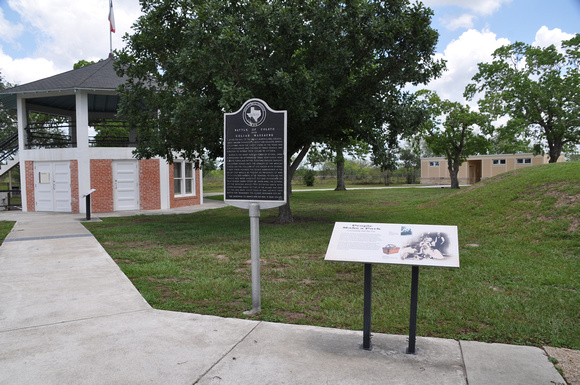 Battle of Coleto and Goliad Massacre

Historical Marker: After the fall of the Alamo, March 6, 1836, Colonel James Walker Fannin, with about 400 soldiers, mostly volunteers from the United States in the Texas War for Independence, was ordered by Texas General Sam Houston to retreat from Goliad to Victoria. March 19, the heavy Mexican force of General Urrea surrounded the withdrawing Texas contingent near Coleto Creek, and bitter fighting ensued. Fannin's volunteers hurled back the assaults of the Mexican force. On the following day, faced with several times their number, the Texans surrendered in the belief they would be treated as prisoners of war of a civilized nation. After removal to Goliad, the Fannin men were marched out and massacred on Palm Sunday under orders of Santa Anna, the general of the Mexican armies. Thus dictator Santa Anna added another infamy to that of the Alamo and gave to the men who saved Texas at San Jacinto their battle cry, "Remember the Alamo, Remember Goliad". The memorial to Fannin and his men is near Goliad.
Andrew Butler Photos
Powered by ZENFOLIO User Agreement
Cancel
Continue