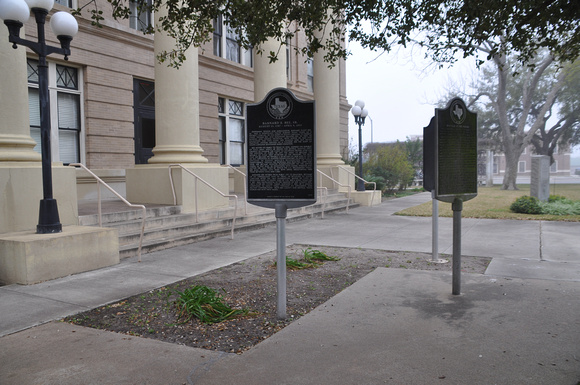 Beeville
Bee County, Texas
28 24.105' N 97 44.909' W
Directions: Start at the intersection of Washington Street and Corpus Street. The marker is on the southeast corner of the intersection in front of the courthouse.

Historical Marker: Statesman, soldier and ambassador, Barnard Elliot Bee, Sr., was a significant figure during Texas' years as a republic (1836-45). He was born in South Carolina to federal judge, Thomas Bee, and Susannah (Bulline) Bee. In 1809, he married Ann Wragg Fayssoux, with whom he had five daughters and two sons. Bee studied law, but never practiced, instead serving as a Colonel on the staff of South Carolina Governor James Hamilton. Bee moved his family to Texas in 1836, joining the Republic of Texas Army, which he served for several months until ordered to examine the coast to ascertain proper sites for the erection of forts. He left the army to become the Republic of Texas' first Secretary of the Treasury. The next year, Bee became the Republic's Secretary of War and in 1839, he was appointed as Minister Plenipotentiary to Mexico. As a diplomat, he sought Mexico's recognition of Texas Independence, though the proposal was rejected. Later that year, Bee became Minister Plenipotentiary to the United States; in that role, he negotiated with Daniel Webster and settled the 1843 treaty by which the U.S. recognized Texas. Bee also entered into talks with Spain, negotiating free trade between Texas and Cuba. Barnard Bee retired from public life to Brazoria. Because of his expansionist view of Texas, he returned to South Carolina after the 1845 annexation, where he lived in Pendleton until his death. One of Col. Bee's sons, Hamilton P. Bee, was instrumental in the naming of Bee County (est. 1857) after his father. Today, Barnard E. Bee, Sr.'s legacy continues to impact Texas through his diplomatic and military contributions. Both Bee County and Beeville, Texas honor him with their names.
Andrew Butler Photos
Powered by ZENFOLIO User Agreement
Cancel
Continue