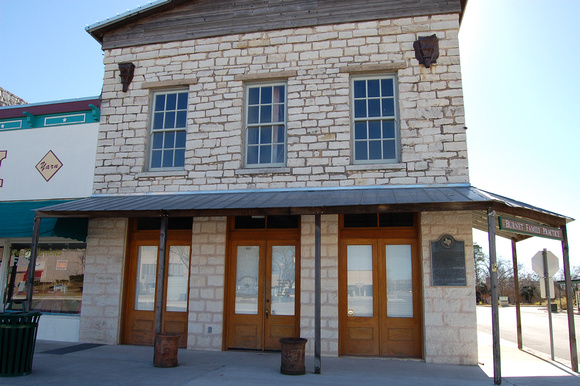 Text: Established in the early 1870s, this weekly newspaper has been in continuous operation for more than one hundred years. The first editor on record was George Whitaker, who served in that position until 1874. In 1898, the paper was sold to L. C. and J. H. Chamberlain, members of a pioneer Burnet County family. The "Bulletin" remained in the ownership of the Chamberlain family until 1960. The newspaper operation has survived numerous hardships over the years, including the destruction of its offices in a 1920 fire. The "Bulletin" has been housed here since 1979. Completed in 1872, this structure was used continuously as a general retail merchandising store until about 1900. Since that time it has served as a combination furniture store and mortuary and as telephone company offices. The second floor was used as a courtroom during the 1930s, while a new county courthouse was constructed. With historic ties to the early days of Burnet, both the "Bulletin" and this building are important reminders of the area's heritage.
Andrew Butler Photos
Powered by ZENFOLIO User Agreement
Cancel
Continue