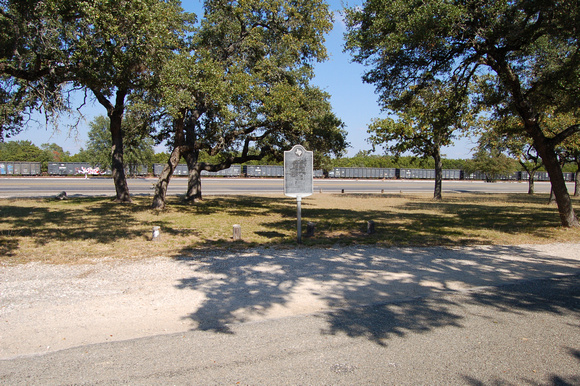 Text: The town of Bertram was founded in 1882 when the Austin and Northwestern Railroad established a route through the area. The community was named for Rudolph Bertram, an Austin merchant who was instrumental in the development of the rail line. Many early residents were from the settlement of South Gabriel (2 mi. SE). Homes and commercial buildings of the pioneer settlers were moved here by brothers L. R. and J. W. Gray. The first store, also relocated from South Gabriel, was run by James E. Riley and Capt. Tom D. Vaughan. Bertram developed as a marketing center for the area's diversified agricultural production. Continued growth came during World War I when the demand for farm and ranch products increased. By the 1920s it was the site of auto dealerships, four banks, a newspaper, a hotel and a variety of other businesses. The economic depression of the 1930s, World War II and improved methods of transportation combined to limit Bertram's growth. Incorporated in the 1970s, the town remains an agricultural center. It serves as a reminder of the pioneers who settled here over a century ago. Many of their descendants still live in the area and serve as leaders of the community.
Andrew Butler Photos
Powered by ZENFOLIO User Agreement
Cancel
Continue