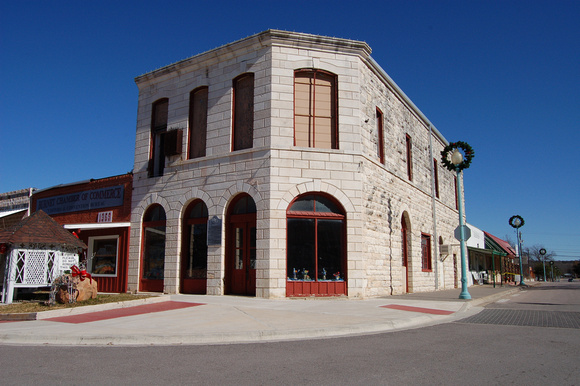 Text: Completed about 1883, this two-story limestone structure is representative of other commercial buildings located on the Courthouse Square in the 1880s. It was built for local financier Dr. W. H. Westfall and Captain Brandt Badger (b. 1839), a native of Georgia who had served in the Confederate Army from Texas during the Civil War. Badger and his son Walter operated a wholesale and retail drugstore on the ground floor. The second floor area, divided into five rooms, was leased for use as office space. Badger sold the business in 1885 and later, in partnership with Adam R. Johnson, helped establish the nearby town of Marble Falls (14 mi. S). For the latter part of the nineteenth century the structure housed a hardware store. In 1903 the newly formed Burnet National Bank was located here and remained at this site until it closed as a result of the economic depression of the 1930s. The Badger Building has also been used by the State Parks Board, the Burnet Rural Telephone Company, the Farm Loan Association, doctors, lawyers, and various businesses. From 1948 to 1959 it served as the Burnet Post Office. In 1966 the structure was occupied by the Youth and Community Center.
Andrew Butler Photos
Powered by ZENFOLIO User Agreement
Cancel
Continue