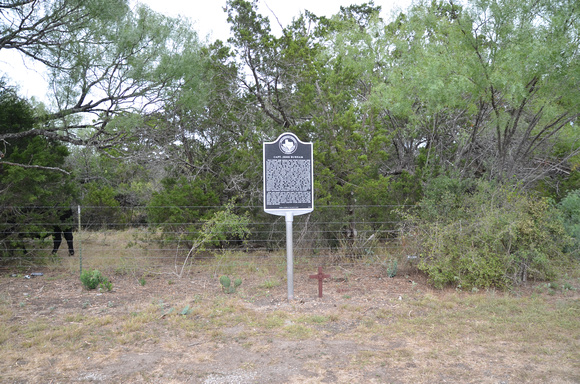 Text: Texas Patriot Jesse Burnam (also spelled Burnham), born in Madison county, Kentucky, was the youngest son of seven children. In 1812, Jesse married Temperance Null Baker in Shelbyville, Tennessee. Jesse was a private in the Mounted Volunteers of Tennessee in the War of 1812, serving from Sep. 1814 to Apr. 1815, including the Battle of New Orleans. Jesse, Temperance and family arrived in Texas in 1821, settling at Pecan Point (Red River County). By 1823, they were among Stephen F. Austin’s “Old Three Hundred,” building a home, fortified trading post and ferry service on the Colorado River frontier. Austin commissioned Burnam as a captain of militia in May 1824. Temperance died in 1833, leaving Jesse with nine children. He later married Nancy Ross, who bore him seven more children. Jesse was a delegate to the Conventions of 1832 and 1833 and the Consultation of 1835. He aided Col. James W. Fannin in gathering volunteers and supplies during the Texas Revolution, and Gen. Sam Houston arrived at Burnam’ s Crossing on March 17, 1836, ordering the ferry, homestead and store burned ahead of the advancing Mexican army. Jesse was a Representative in the Republic of Texas’ provisional government and its first congress. Jesse and Nancy moved their family to Burnet County in 1855, following two older sons who had settled here. Jesse’s land was southeast of present-day Marble Falls on Double Horn Creek, where he established one of the first sheep raising operations in the area and a large wheat farm. The historic Burnam homestead, now in the family’s fifth generation, includes a log cabin, two-story home, spring house, and family cemetery where Jesse, Nancy and others are buried.
Andrew Butler Photos
Powered by ZENFOLIO User Agreement
Cancel
Continue