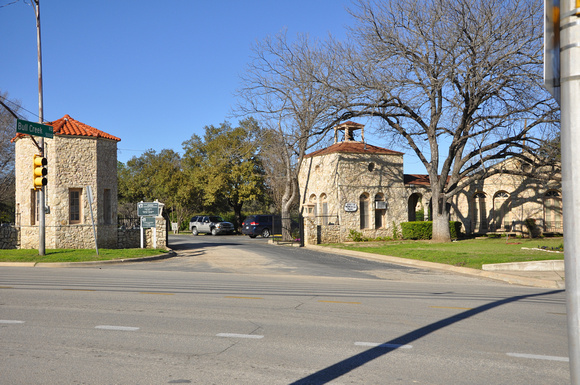 Historical Marker: As the population of the city of Austin grew larger during the early 20th century, a privately owned cemetery with plots available for purchase by the public became necessary. In 1927, Austin Memorial Park, a private corporation, purchased farm land located northwest of the city of Austin from Gladys and J.T. Bowman. The first recorded burial in Austin Memorial Park was that of M.A. Hanna, who was interred on April 26, 1928. In order to provide cemetery services for the citizens of Austin and the surrounding area, the city purchased Austin Memorial Park in 1941 for the price of $56,000, making it a public cemetery. There have been several reductions in size of the cemetery throughout the years. In 1933, one acre on the west edge of the site was sold for the establishment of the Jewish Agudas Achim Cemetery, and another portion of the original property was sold by the city during the 1960s. The construction of Loop 1 (Mopac Boulevard) during the 1970s took away a segment of property in the extreme southwest corner of the site. Construction of the Northwest Recreation Center by the city of Austin in 1979 furthur reduced the cemetery's size. In 2004 and 2005, a separate section was reserved for Temple Beth Shalom for the creation of a Jewish section within the existing boundary of Austin Memorial Park. Well-known citizens interred in the cemetery include Pulitzer Prize-winning novelist James A. Michener (1907-1997), Texas Ranger Frances Augustus Frank Hamer (1884-1955), actor Zachary Scott, Jr. (1914-1965), and noted University of Texas coaches Dana X. Bible (1891-1980), William John Billy Disch (1874-1953), Bibb A. Falk (1899-1989) and Harvey Penick (1904-1995).
Andrew Butler Photos
Powered by ZENFOLIO User Agreement
Cancel
Continue