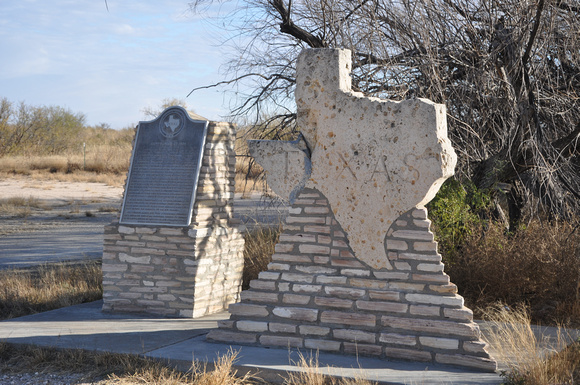 Text: Four miles east of this site is an official corner post marking agreement of Texas to give up some of the land won in her 1836 war for independence. It also marks New Mexico's southeast corner. When Texas was annexed to the United States, 1846, her territory included 98,300 square miles now in the states of Colorado, Kansas, New Mexico, Oklahoma and Wyoming. After the Mexican War (fought 1846-1848, over the annexation), anti-slavery forces in the U. S. sought to trim the size of Texas, a slave state. To raise money and establish a definite boundary, Texas accepted the compromise of 1850 and agreed to give up a third of her area in return for payment of $10,000,000. The money paid debts of the former Republic of Texas, set up a $2,000,000 public school fund, and erected state buildings, including a new capitol (which subsequently burned in 1881). By the 1850 compromise, the western boundary of Texas follows the 103rd meridian south from 36* 30'; near here intersects the 32nd parallel, then goes west along the parallel to the Rio Grande. The corner marks not only a peaceable boundary pact, but also shows an unbroken stretch of Permian Basin lands, unified in geography and common goals.
Andrew Butler Photos
Powered by ZENFOLIO User Agreement
Cancel
Continue