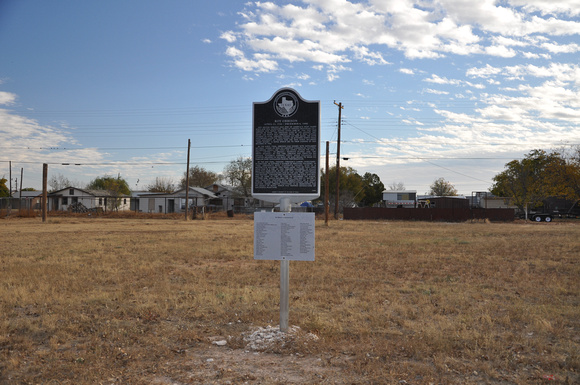 Text: Roy Kelton Orbison was one of America's most famed rock and roll musicians. Born in Vernon (Wilbarger Co.), Orbison and family moved often and by 1946 they had settled in Wink. The Orbisons lived at 102 Langley Way (now 105 N. Roy Orbison Drive). As a high school student in Wink, Orbison formed his first band, the Wink Westerners (later The Teen Kings). He attended North Texas State University at which time the Teen Kings recorded "Ooby Dooby," a song which led to their signing by Sun Records in 1956. By the early 1960s, Orbison had signed with Monument Records, where he had his greatest commercial success, recording songs like "Only the Lonely (Know The Way I Feel)", "Crying", "In Dreams", "Running Scared" and "Oh! Pretty Woman". By this time Orbison had perfected his unique, powerful singing voice, while focusing on complex melodies in his music. He also began to wear his familiar dark sunglasses during performances. By the mid-1960s, though, Orbison's career languished. In addition, he suffered a number of personal tragedies. In 1966, Orbison's wife Claudette (Frady) died in a motorccle accident; two years later, two of their three sons died in a fire; in 1969, Orbison remarried. He would have two more sons. In the late 1970s, other artists began covering Orbison's music and by the late 1980s, his career was revived. Orbison was inducted into the Rock and Roll Hall of Fame in 1987. In 1988, he recorded the album "Mystery Gir", which included the hit, "You Got It". Before it was finalized Orbison died unexpectedly of a heart attack. The album was released posthumously and was a success. Today, Orbison continues to be remembered for his legacy of music, which has inspired generations of successful musicians.
Andrew Butler Photos
Powered by ZENFOLIO User Agreement
Cancel
Continue