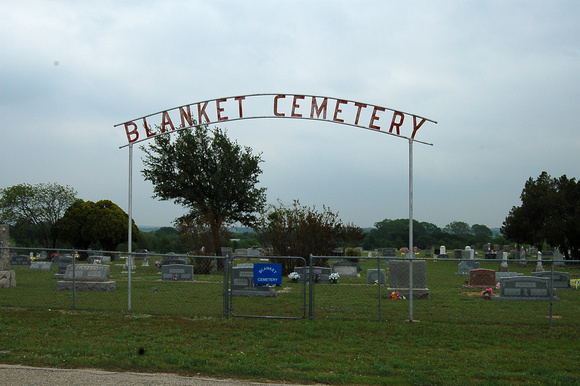 Historical Marker: This burial ground has served Blanket since the late 1800s. Blanket was established in 1874 when settlers came to this area. Pinkney C. and Sarah Jane (Dunaway) Anderson purchased property and sold tracts of land to other settlers. In 1891, residents and business moved to the current location, near a newly built depot for the Fort Worth and Rio Grande Railway. The oldest interment here is Oliver Claude Anderson (d. 1878). Three other burials occurred before 1901, when Pinkey Anderson purchased this property for use as a cemetery. The Blankety Cemetery Association, which formed by 1945, purchased additional acreage that year; further property was added in 1981. Interments include veterans of conflicts dating to the Civil War, including Francis Marion Cross (d. 1921) who also served on the Texas frontier and was an author. The McCulley family has generations of soldiers buried here, including World War II veteran, Jacobus Elias McCulley (d. 1942), whose remains were reinterred from Luzon Island in the Philippines, where he was a prisoner of war in the Cabanatuan Prison Camp in the months following the Bataan Death March. Other interments include David Pinckney Cobb (d. 1951) and noted artist Harold Osman Kelley (d. 1955). Others buried here include pioneers, ministers, and individuals of various religions and nationalities. The cemetery features curbing, interior fencing and grave slabs. Today, Blanket Cemetery remains an important record as the final resting place of the men and women who shaped the Blanket Community.
Andrew Butler Photos
Powered by ZENFOLIO User Agreement
Cancel
Continue