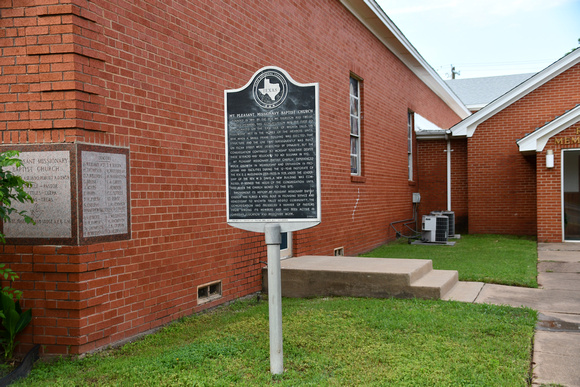 Text: Founded in 1891 by the Rev. Mr. Thurston and twelve charter members, this congregation was the first to be organized on the east side of Wichita Falls. The fellowship met in the homes of the members until 1894, when a small frame building was erected. That structure and the one that subsequently was built on Pecan Street were destroyed by dynamite, but the congregation continued to worship together despite these setbacks and relocated to 401 Sullivan in 1912. Mt. Pleasant Missionary Baptist Church experienced much growth in membership and expansion in programs and facilities during the 12-year pastorate of the Rev. E. J. McClendon (1876-1925). In 1928, under the leadership of the Rev. W. D. Davis, a new building was completed. It served the needs of the congregation until 1959, when the church moved to this site. Throughout its history, Mt. Pleasant Missionary Baptist Church has played a vital role in providing service and leadership to Wichita Falls' Negro community. The congregation has produced a number of pastors from among its members and has been active in Christian education and missionary work.