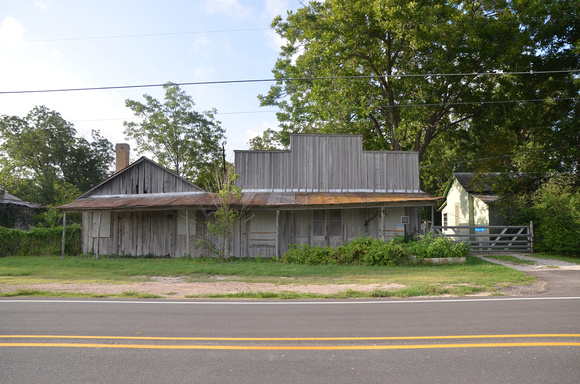 Text: The Wenzel/Schwab (aka Comal) Blacksmith Shop was originally established sometime prior to 1915 by Peter Ignatz Wenzel, one of the original founding colonist of New Braunfels, Texas. On June 10, 1851 and again in 1864 Ignatz Wenzel purchased 100 acres and 303 acres of land, respectively, in the Comal Settlement Area (seven miles southwest of New Braunfels, Texas) where besides farming operations he established the community’s first blacksmith shop (exact date of formation unknown) along the historic “Post Road” that has since become FM 482. In 1915, ownership of the blacksmith shop passed to Bruno Schwab, grandson of Valentine Joseph Schwab an original settler of the Comal Settlement Area and after whom Schwab Road is named. Bruno was an inventor who developed many devices for use by the farmers of the area such as a “Pear Burner” for use in burning off the stickers of the cactus plant so the cattle could eat the cactus in very dry seasons when no vegetation was growing. He patented the first hard rubber tire remover with the U.S. Government Patent Office. He was an original manufacturer of farm implements and ranch gates spread throughout the Texas Hill Country area. Bruno enjoyed music and played in bands for special occasions throughout the Comal County area. The blacksmith was a vital to the prosperity of the farming communities due to the farmer’s dependence upon the blacksmith’s skills to keep their horses shoed, wagons repaired, cattle branded, etc. Presented by the Schertz Historical Preservation Committee.
Andrew Butler Photos
Powered by ZENFOLIO User Agreement
Cancel
Continue