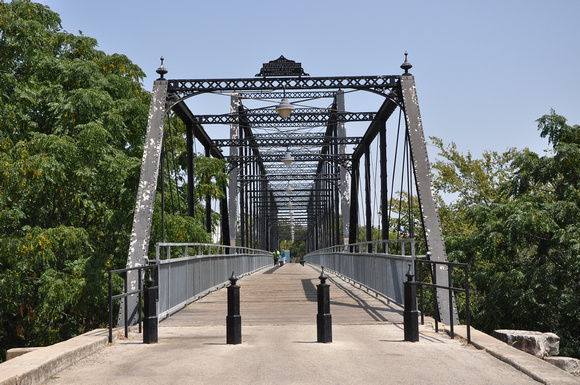 Text: Caravans carrying supplies to Spanish missions in east Texas and other travelers crossed the Guadalupe River on El Camino Real (The King's Highway) near this site in the 18th century. It sometimes took weeks for floodwaters to subside so travelers could cross. In 1887, the Comal County commissioners court contracted with the King Iron Bridge Company of Ohio to build a high water bridge over the Guadalupe River. Among the last wrought iron bridges built in Texas and one of the first long-term toll-free structures completed over a major waterway in the state, this monumental truss structure extends more than 640 feet in length. It is comprised of two main spans, known as Pratt (Whipple) truss spans, flanked by two smaller spans. The Whipple was a variation on the more typical Pratt truss style bridge design which enjoyed brief but explosive popularity in the mid- to late-19th century. These trusses are connected by a pin-and-hanger system, which was the common method of the time. The spans are supported by oval-shaped masonry piers with rusticated stonework and pointed, or "cut-water," ends. In 1917, the Texas Highway Department designated the Faust Street bridge to serve as a major crossing for all traffic between Austin and San Antonio on state highway 2, formerly the Austin-San Antonio post road. In 1934, a new concrete highway bridge was erected. The Faust Street bridge continued to serve local traffic until it was damaged by fire in 1979. Its unique design, using a combination of Pratt and Whipple truss types, and its wrought iron construction place the Faust Street bridge among the important historic bridges in the state.
Andrew Butler Photos
Powered by ZENFOLIO User Agreement
Cancel
Continue