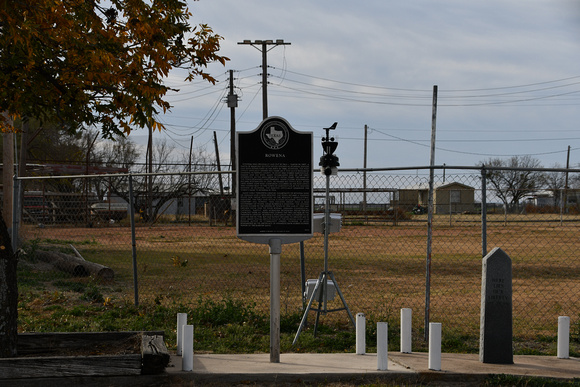 Text: Rowena was originally laid out by Paul J. Baron in 1897. A Santa Fe Railroad section house known as Rowena Station had been established in the area in 1888; however, the post office officially denied this name as it too much resembled Ravenna in Fannin County. In what was dubbed Baronsville, Baron and his wife, Mary, established one of the first residences. As the area grew in its initial years, the name of the town remained undetermined. When Gustav Schuhmann became postmaster in 1900, he named his office Bolf, after land agent John Bolf. Confusion occurred as the post office was named Bolf in the town of Baronsville at the station known as Rowena. The Barons officially changed the town’s name to Rowena in 1904. Many early twentieth-century inhabitants of Rowena were of German and Czech descent. The town became a trading point for those involved in the region's agricultural industry. The first one-room school building, known as Cemetery Hill School, was located about half a mile southeast of town, near Rowena's cemetery. The school moved closer to the center of town in 1904 and by 1908 had grown from one to four rooms. German Evangelical, Catholic, Baptist, and Moravian Bohemian Presbyterian churches were all established during the first decade of the twentieth century. Rowena’s population was estimated to be around 800 in 1930, but had slowly declined to around 450 in 2000. Many social groups such as the Rowena Lions Club remain active in community upkeep. Rowena is also remembered as the birthplace of infamous bank robber Bonnie Parker of the Barrow Gang.