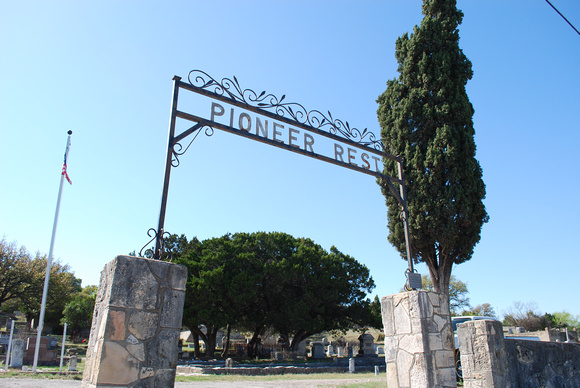 Text: Burial plot was begun by Adam Bradford, who buried his father, Jack Bradford, here in 1863. As the town and cemetery grew, the city bought the tract from Mrs. Gustav E. Schleicher in 1904. Fence surrounding cemetery was built of stone from the old courthouse and jail, razed in 1931, and reputed to have been in the original structure of nearby San Luis de Las Amarillas (Built by the Spanish in 1757). Final resting place for many area pioneers, including soldiers, cowboys, gamblers, preachers, civil war veterans, Indian fighters, and Texas Rangers.
Andrew Butler Photos
Powered by ZENFOLIO User Agreement
Cancel
Continue