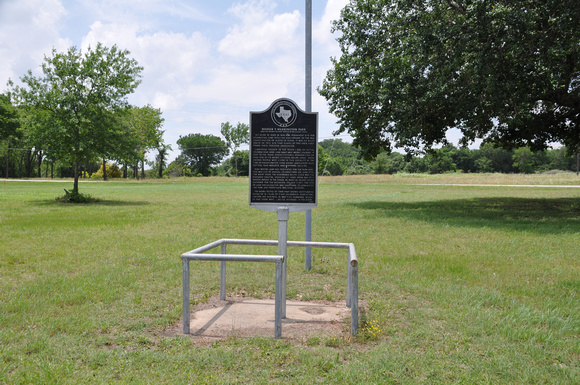 Texas Historical Marker: Set aside by deed in 1898 as a permanent site for celebrating June 19th-- the anniversary of the 1865 emancipation of slaves in Texas. It was 2.5 miles south of this site that slaves of this area first heard their freedom announced. Limestone County in the 1860's-- era of initial celebrations here--had many able Negro leaders. It sent to the Texas constitutional convention of 1866 one of its Negro citizens, Ralph Long. From among people who lived in this locality at the time of emancipation came Negro legislators Giles Cotton, Dave Medlock and Sheppard Mullins. Even before land was dedicated for the park here, this was site of annual celebration on June 19th. For many years the honorable Ralph Long was the featured orator, speaking at times from bed of a wagon parked in the shade. As many as 20,000 often gathered for the occasion. On July 7, 1912, the 19th of June Organization was chartered, to administer the park and perpetuate regional history. The Negro people of Texas have shown outstanding initiative in fields of civic leadership, education, culture and business. In 1860 they numbered 187,921; in 1960 there were 1,187,125 Negros in the State.
Andrew Butler Photos
Powered by ZENFOLIO User Agreement
Cancel
Continue