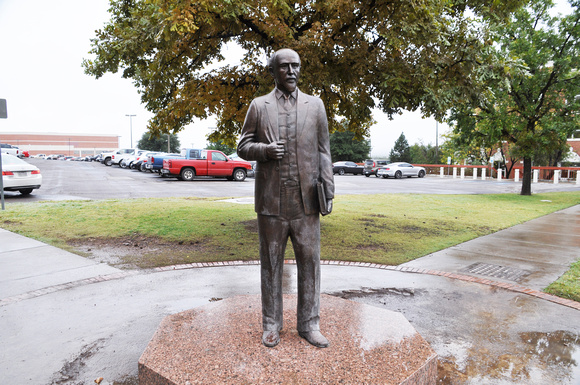 Text: Born in Iowa on September 27, 1838, Lawrence Sullivan Ross came with his family to the frontier of the Republic of Texas in 1839. In his teens and early twenties, he was involved in frontier defense. Recognizing the importance of education, Ross attended Baylor University and received an A.B. degree from the Wesleyan University in Florence, Alabama, in 1859. From October 1859 to February 1860 Sul Ross was a Captain in the Mounted Texas Rangers and took part in the Pease River campaign. He served in the 6th Texas Cavalry during the Civil War, ending the war as a Brigadier General and commander of the Texas Cavalry Brigade. After the war Sul Ross raised cattle and farmed for several years, was elected Sheriff of McLennan County (1873-1875), was a member of the 1876 Texas Constitutional Convention and served as a state senator (1881-1883). In 1886 he was elected Governor of Texas and, during his two terms, he championed public education and oversaw the construction of the new capitol building. In 1891 he became president of the Agricultural and Mechanical College of Texas and under his leadership that troubled institution flourished and gained respect throughout the state. When he died on January 3, 1898, Texans mourned and extolled him for his courage, his dedication to the state and his public spirit. The Dallas Morning News on January 4, 1898, wrote: "It has been the lot of few men to be of such great service to Texas as Sul Ross. . . he has. . . discharged every duty imposed upon him with diligence, ability, honesty, and patriotism." In 1917 the Texas Legislature named a newly created Normal School in Alpine, Texas, in his honor — Sul Ross Normal College which became Sul Ross State University in 1969.