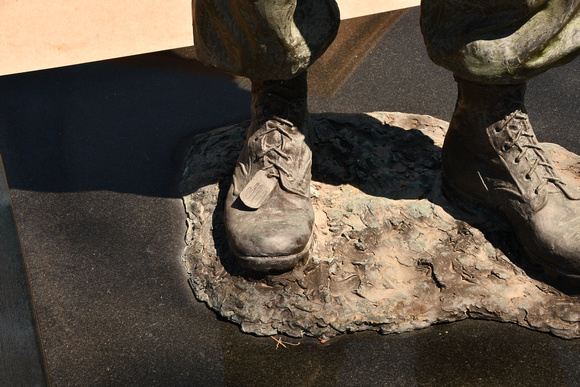 Corsicana
Navarro County, Texas
32 05.705' N 96 28.120' W
Address: 300 W. 3rd Street
Artist: Lisa Perry
Text: Sergeant Candelario Garcia, Jr. enlisted in the U.S. Army on May 28, 1963. On December 8, 1968 while serving in Vietnam, he was involved in a battle that earned him a nomination for the Medal of Honor, which was awarded posthumously in 2014. Sergeant Garcia fought heroically, saving his entire platoon during the attack. His unit was under heavy fire and several men were wounded and trapped. Ignoring the raining bullets, Sergeant Garcia crawled within 10 meters of a machine gun bunker. According to officials with the U.S. Army, while firing his rifle, Sergeant ran towards the enemy killing them all. In addition to the Medal of Honor, Sergeant Garcia received the Silver Star, Bronze Star, Purple Heart, Army Commendation Medal, Combat Infantryman Badge, and numerous other commendations. Sergeant Garcia died on January 10, 2913. His family says they never knew what he did in the war, but they know now. The City of Corsicana is proud of Sergeant Garcia’s valorous actions in battle and hope this bronze will appropriately celebrate his life in service.
Date: 2016