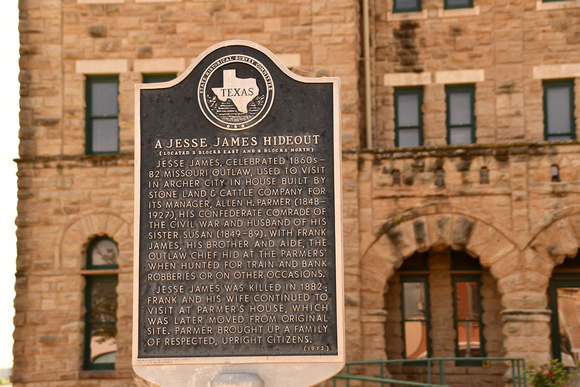 Text: Jesse James, celebrated 1860s-1882 Missouri outlaw, used to visit in Archer City in house built by Stone Land and Cattle Company for its manager, Allen H. Parmer (1848-1927), his Confederate comrade of the Civil War and husband of his sister Susan (1849-89). With Frank James, his brother and aide, the outlaw chief hid at the Parmers' when hunted for train and bank robberies or on other occasions. Jesse James was killed in 1882; Frank and his wife continued to visit at Parmer's house, which was later moved from original site. Parmer brought up a family of respected, upright citizens.