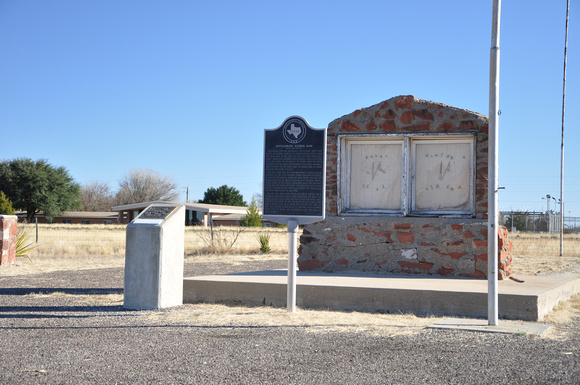 Text: Nicknamed for the numerous rattlesnake dens that were uncovered during its construction, Pyote Army Air Base was established in 1942 to train replacement crews for bombers during World War II. Located on 2,700 acres of University of Texas land, the base consisted of two 8,400-foot runways, five large hangars, and hundreds of buildings used to house 3,000 to 4,000 soldiers an 2,000 civilians. On Jan. 1, 1943, the 19th Bombardment Group (later known as the 19th Combat Crew training B-17 bomber crews. Pyote came to be highly regarded as a top training field, and its crews set many new records for flying hours. This reputation continued after the transition to B-29s was made in July 1944. During the post-war years, the base served as a storage facility, at one time housing as many as 2,000 aircraft, including the "Enola Gay", the plane that dropped the first atomic bomb. Pyote also was used for a short time as a radar station, but by 1966 it was no longer economical to maintain such a large base for so small an operation, and the facility was closed.
Andrew Butler Photos
Powered by ZENFOLIO User Agreement
Cancel
Continue