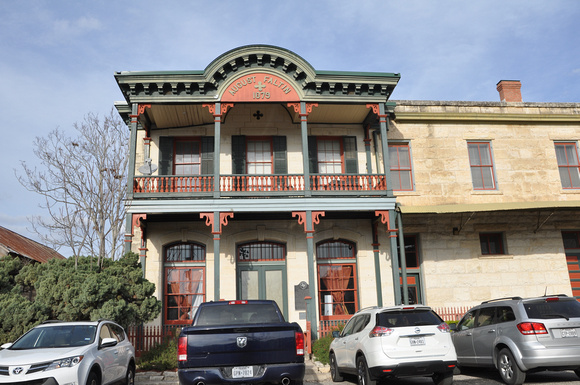 Comfort
Kendall County, Texas
29 57.948' N 98 54.539' W
Directions: Start at the intersection of Main Street and 7th Street. The building is on the northwest corner of the intersection.

Text: Prussian native Friedrich August Faltin (1830-1905) moved to Comfort in 1856 and purchased the general merchandise business of Theodor Goldbeck, located at this site. Trained in his father's store, which had been established about 1818 in Danzig, Prussia, now Gdansk, Poland, Faltin became a leading merchant of the Texas Hill Country. In addition, his 1869 partnership with Capt. Charles Schreiner of Kerrville became the nucleus of the vast Schreiner enterprises. By the late 1870s Faltin's business, which included banking and post office services, had outgrown the structure at this site and he had architect Alfred Giles of San Antonio design a new building. Constructed by the noted builder J. H. Kampmann, the Victorian Italian edifice was completed in 1879. Later run by Faltin's sons Richard and August S., the business was sold in 1907 to their brother-in-law Dan Holekamp and his sons Otto and Edgar. That same year an addition to the building was completed. Also designed by Giles, it included second floor space for meetings and fraternal and civic groups. In 1968 the property was sold back to the Faltin family. The August Faltin Building remains as a symbol of the area's early commercial growth.
Andrew Butler Photos
Powered by ZENFOLIO User Agreement
Cancel
Continue