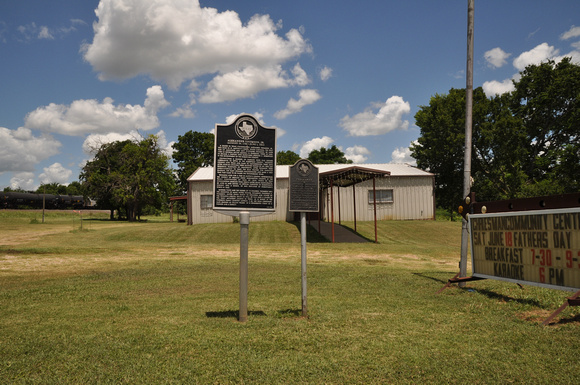 Text: (August 29, 1785 - June 1, 1863) A leader in colonizing Texas. Born in St. Matthew's Parish, S.C.; lived also in Georgia, then in Tennessee where in 1830 he became partner of the Empresario in development of the Sterling C. Robertson Colony. Conducting a number of families who had signed agreements to settle in the Robertson Colony, he crossed into Texas and came to Nacogdoches three days after Mexican officials there received notice of 1830 law requiring passports of immigrants. After Thomson tried unsuccessfully to have rule waived for hardship reasons, the party bypassed Nacogdoches, making a new trail often used afterward and known as the Tennesseans' Road. Thomson lived for a time in Austin's Colony, representing District of Hidalgo (now Washington County) at Texas Convention of 1832. By 1835, when he was Consultation Delegate from Viesca (later Milam Municipality), he was living and serving as official surveyor in Robertson's Colony. Still a leader, he was Robertson's executor in 1842. Married twice, father of 13, he was ancestor of many noted Texans, including Thaddeus A. Thomson, United States envoy to Colombia and signer of the Thomson-Urrutia Treaty in 1914. Alexander Thomson is buried in Thomson Family Cemetery one mile to the northeast.
Andrew Butler Photos
Powered by ZENFOLIO User Agreement
Cancel
Continue