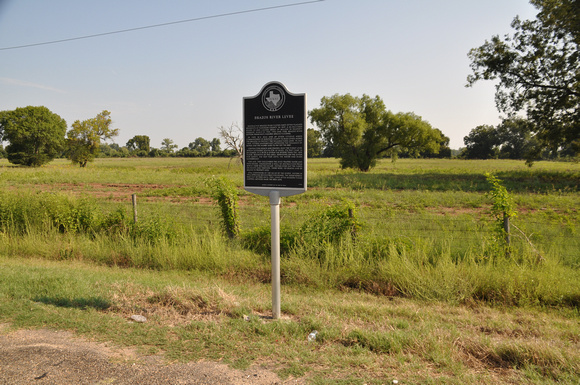 Text: Destructive Brazos River floods have often plagued residents of Burleson County. In 1899, a 30-inch rain killed 35 and caused about $9 million in property damage. Again in 1900, 1902 and 1908 Brazos River bottom inhabitants endured serious flooding. In 1909 W.S. Mial and 49 other citizens asked the commissioners of Burleson County to build levees along the Brazos to protect the valuable farm land. In July 1909, voters unanimously approved the issuance of bonds and the higher taxes to pay off the debt. Contractors Roach and Stansell built the 9-foot levee which extended south for 30 miles. Its test came in December 1913, with a storm far worse than the 1899 flood. Residents of this area, depending on the levees for safety, did not flee until the water had risen dangerously. Too late, they discovered the levee trapped water and then broke, unleashing a wall of destruction from which there was no escape. Victims rode out the flood on roofs and in treetops. There where 180 deaths and $8 million in property loss. Still convinced of the value of the levees, voters in 1914 approved reconstruction bonds. The indebtedness was not retired until 1963, long after modern flood control methods made the area safe.
Andrew Butler Photos
Powered by ZENFOLIO User Agreement
Cancel
Continue