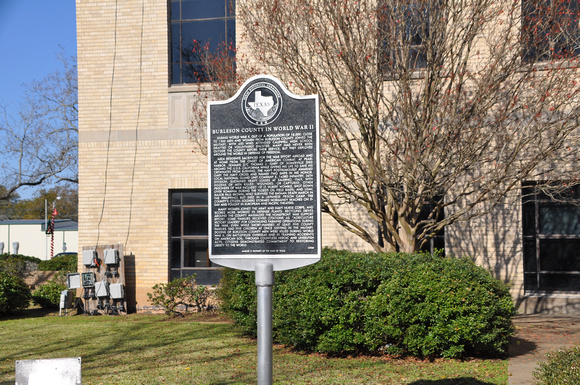 Caldwell
Burleson County, Texas
30 31.900' N 96 41.618' W
Directions: Start at the intersection of Buck Street and Main Street. The marker is on the northwest corner of the intersection on the courthouse grounds.

Text: During World War II, out of a population of 18,000, close to 1300 men and women of Burleson County joined the military, with 450 who attended Caldwell High School drafted or voluntarily enlisted. Many had never been outside the county before their service, but they deployed around the world in defense of freedom. Area residents sacrificed for the war effort abroad and at home from the onset of American combat. At Pearl Harbor, Seaman 2/C Thomas J. Gary of Somerville died aboard the U.S.S. California while giving his life to save his crewmates from burning. The Navy posthumously awarded Gary the Navy Cross and named two ships in his honor. Local National Guard Unit Company E, 143rd Infantry, 36th Division, sustained heavy losses at Salerno, Italy, with dozens of men killed, wounded, or captured. Other prisoners of war included 1st Lt. Hubert Womble, shot down over Romania during the Ploesti Oil Field raids, and USMC Major Paul Brown, who survived the Bataan Death March in the Philippines but died in a Japanese prison camp. The county’s citizen soldiers stormed Normandy Beaches on D-Day and fought in European and Pacific Theaters. Many women joined the Army and Navy Nurse Corps, and scores more worked in defense plants. Recycling drives around the county maximized the homefront war support effort. Some families received citations as “Agriculture Victory Leaders” for continuing farming operations during the war, even while short-handed at least five county families had five children at once serving in the military. Dozens of Burleson County men were killed during World War II, on battlefields overseas and in training accidents on American soil. Through countless heroic and unselfish acts, citizens demonstrated commitment to restoring liberty to the world. (2008) Marker is property of the State of Texas
Andrew Butler Photos
Powered by ZENFOLIO User Agreement
Cancel
Continue