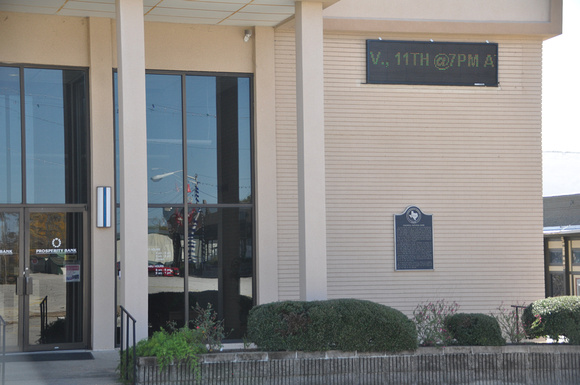 Caldwell
Burleson County, Texas
30 31.892' N 96 41.585' W
Directions: Start at the intersection of Echols Street and Buck Street. The bank is on the southeast corner of the intersection.

Text: On January 24, 1903, a group of local businessmen under the direction of J. J. Lane and C. C. Nelms met for the purpose of establishing a national bank. The thirty original stock subscribers who attended pledged $25,000 in organizational capital and the institution opened the following month. Operating under Federal Charter No. 6607, Caldwell National Bank is the first and the oldest publicity owned financial institution in Burleson County. In 1906, following earlier increases in capital, the business was expanded when the directors voted to purchase the assets of the First National Bank, a Caldwell financial institution under the direction of William Reeves. Three years later, Caldwell National Bank operations were moved to this site. The original building here was later replaced by a larger facility. Burleson County native C. C. Nelms became president of the bank in 1923 and was named chairman of the board in 1953. He died in 1961, following 58 years of service to the institution. A growing yet stable financial force in Caldwell and in Burleson County, the Caldwell National Bank has been a leader in the development of the community since the turn of the century.
Andrew Butler Photos
Powered by ZENFOLIO User Agreement
Cancel
Continue