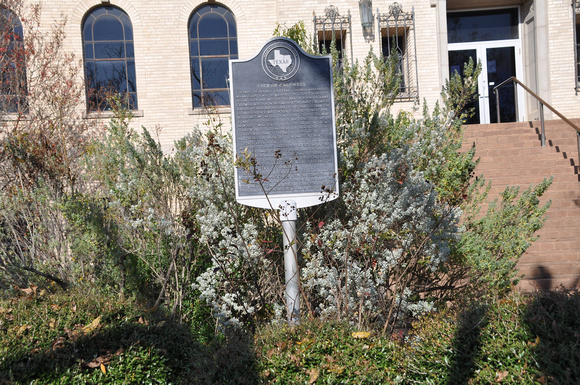 Caldwell
Burleson County, Texas
30 31.900' N 96 41.618' W
Directions: Start at the intersection of Buck Street and Main Street. The marker is on the northwest corner of the intersection on the courthouse grounds.

Text: In 1840 the Republic of Texas Congress annexed to Milam County all of Washington County north of Yegua Creek and west of the Brazos River. The name Caldwell, which honored Mathew "Old Paint" Caldwell, a noted pioneer and a signer of the Texas Declaration of Independence, was chosen for a settlement that would become the seat of a future county. Following a land title dispute, this site was selected for the proposed town. Located on the Old San Antonio Road, it had been settled earlier by Virginia native Lewis L. Chiles, a veteran of the Battle of San Jacinto who had operated a trading post on Davidson Creek. George B. Erath platted the town of Caldwell in 1840. Streets running parallel to the Old San Antonio road were named for native animals and intersecting streets were named for the commissioners who had selected the townsite. When Burleson County was created six years later, Caldwell became the permanent seat of government. Incorporated in 1891, Caldwell developed as a major agricultural shipping center with the completion of area rail lines in 1890 and 1912. Since the 1840s the city has played a vital role in the region through its steady commercial growth and rich heritage.
Andrew Butler Photos
Powered by ZENFOLIO User Agreement
Cancel
Continue