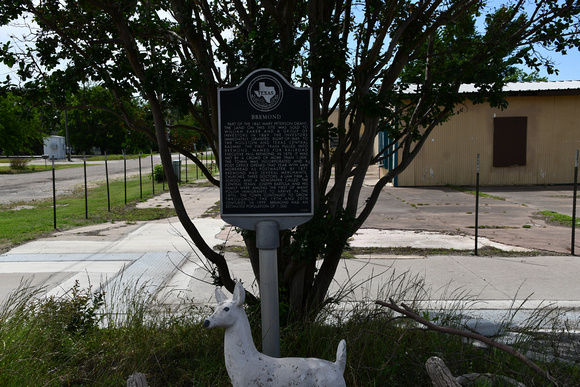 Text: Part of the 1841 Mary Peterson grant, the land on this site was sold to William Baker and a group of investors in 1869. The investors immediately granted right-of-way to the Houston and Texas Central Railway. The first train pulled into Bremond, named for railroad executive Paul Bremond, in 1870. It was met by a crowd of more than 1,000. The town was incorporated and a post office opened that year with Sam Morehead as postmaster. By 1871 Bremond had several merchants, churches, three doctors, a law firm, a school and a newspaper called The Central Texan. Joseph Bartula and his family were among the first of many Polish immigrants to arrive in the 1870s. The town continued to grow throughout the 19th and 20th centuries. In 1999, Bremond had an estimated population of 1,300.