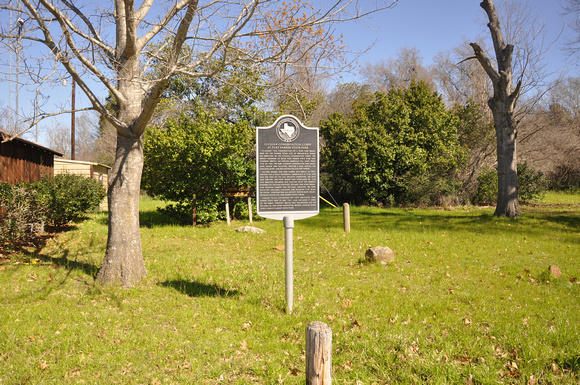 Text: In August 1935, construction of a state park began here on the former town site of Springfield under the direction of the Civilian Conservation Corps. The group assigned to build Fort Parker State Park was Company 3807(C), an African American CCC Camp. From 1935 to 1942, the park company constructed park buildings, roads and facilities, erected a dam across the Navasota River, and reconstructed old Fort Parker. Located nearby, old Fort Parker was rebuilt in preparation for a Texas Centennial observance in 1936, and was the first of the CCC projects completed. The dam that created Lake Fort Parker was concluded by 1938 and required breaking and hauling rock for cement, digging out the dam footings, spillway, and wing walks, and pouring cement for the dam. Creating the park facilities included clearing and building five miles of roads, constructing an activity center / bath house, drinking fountains, and cement picnic tables. Former Texas Governor Pat Neff dedicated Fort Parker State Park in May 1941, and declared it open to the public. Company 3807(C) was transferred out of the area in 1942 after completing several complex tasks over a span of almost seven years.
Andrew Butler Photos
Powered by ZENFOLIO User Agreement
Cancel
Continue