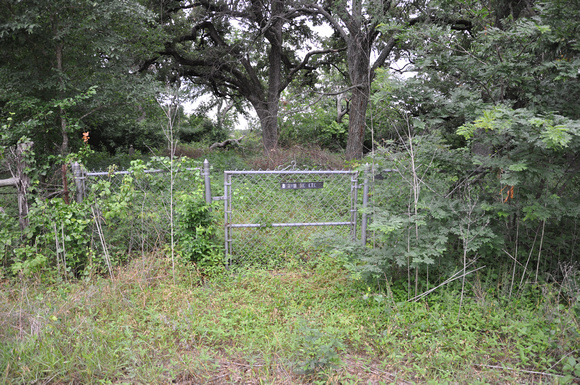 Text: The Brown Family Cemetery traces its origin to the settlement of North Carolina native Ervin Brown (1801-1875) and his wife Matilda (1807-1871) in Washington County, Texas, in 1846. Ervin and Matilda moved their family to a 1600-acre farm in Limestone County near the community of Eutaw in 1857. Ervin was a charter member of the Eutaw Masonic Lodge in 1859. Ervin and Matilda are both buried in this cemetery. Their son, Thomas Jefferson (T. J.), served as a Confederate captain in the Civil War and later as Chief Justice of the Supreme Court of Texas from 1911 to 1915. The earliest documented burial here was that of Mary Ann Brown, who died on April 26, 1865. She was the wife of Ervin's son James Petty (J. P.) Brown. A captain in the Confederate Army during the Civil War, J. P. was elected to the Texas House of Representatives in 1879. J. P. and Mary's son Gibson A. Brown became a prominent figure in Texas and Oklahoma. In 1896 he successfully argued for legislation to protect property owners affected by the U.S. Supreme Court decision marking the South Fork of the Red River the official boundary between the two states. Neither T. J. Brown nor Gibson Brown are buried here, however. The cemetery remains in use by Brown descendants.
Andrew Butler Photos
Powered by ZENFOLIO User Agreement
Cancel
Continue