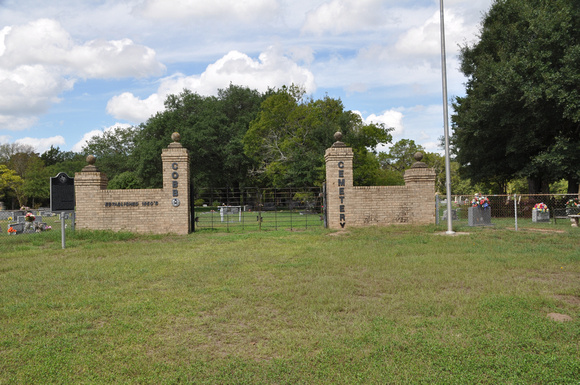 Text: Brinkley Davis and his family, including his daughter Mary Ellen, moved to this area from Indiana in 1833. Brinkley Davis received a land grant of about 4500 acres from the Mexican government in 1835, and the surrounding area became known as Davis Prairie. A native of Alabama, Pinckney Cobb came to Texas in the early 1840s. He married Mary Ellen Davis in 1845, and they eventually had nine children. This cemetery was established on Cobb family land in the 1850s. Brinkley Davis died in 1852 and his is the earliest marked grave. William Neri, the second child of Pinckney and Mary Ellen Cobb, died at the age of six in 1855. Pinckney Cobb died at age 45 and was interred here in 1866, seven months before his youngest son was born. Another Cobb son, George Levi, was 20 when he died and was buried here in 1872. County Judge l. B. Cobb donated a parcel of land joining the west side of the cemetery in 1887. Many early settlers of the surrounding communities are interred here. The site was cared for by family and community members until the area population decreased during World War II and it became necessary to pay for cemetery maintenance. Other burials of interest include that of Nathaniel G. Hudson, who came to Texas in 1836, joined the Santa Fe expedition in 1841 and was held prisoner in Mexico from 1841 to 1843. Nathaniel P. Hudson, a veteran of the Spanish American War, also is interred here, as are seven Confederate veterans. At the dawn of the 21st century, 964 graves (227 unidentified) graced the cemetery grounds. Many early graves are those of infants and small children, testaments to the harsh conditions of pioneer life.
Andrew Butler Photos
Powered by ZENFOLIO User Agreement
Cancel
Continue