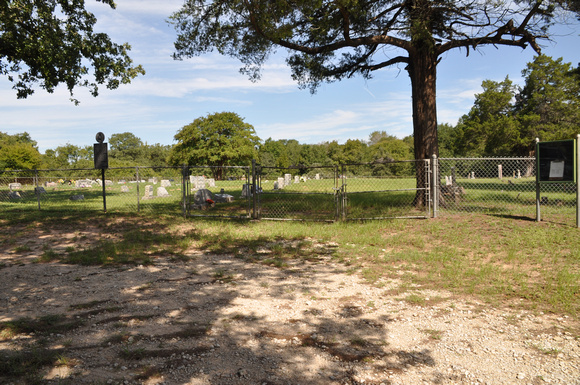 Text: Joseph and Hannah (Penrod) Ferguson moved to this area in the 1830s, years before the formation of Limestone County following Texas statehood. Their property, known as Ferguson Prairie, stretched from sough of the early Box Church community to beyond, and including, present-day Oletha. Records indicate the Fergusons were founding members of the Oletha community, established in the 1870s. Other early residents included J.S. and W.S. McKenzie, John Sadler, Charles Roberts and W.W. Barnett. Local tradition holds the first burial at what became the community cemetery was for a young girl whose family was in the area for a protracted camp revival when she died. The first marked grave is that of Hannah (Penrod) Ferguson (d. 1866). Joseph, who died in 1875, is buried beside her. Notable burials include the one of John Sadler (d. 1885), who fought in the Battle of San Jacinto during the Texas Revolution. The original Ferguson Cemetery site was formally deeded to the community in 1932. In 1997, descendants of those interred here formed an association to maintain the burial ground, an important link to the community's early history.
Andrew Butler Photos
Powered by ZENFOLIO User Agreement
Cancel
Continue