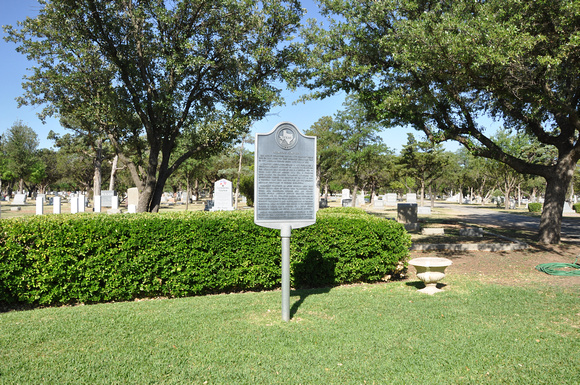 Text: San Angelo established the "New City Cemetery" here in 1893 on 22.5 acres. The first recorded burial was that of city alderman George Bond's wife, Elise, in 1893. A cemetery association, formed in 1897, organized a volunteer women's auxiliary to manage the graveyard. The auxiliary was headed by Mrs. C. A. Broome for 38 years. Early auxiliary member Leila Hill is credited with naming the cemetery "Fairmount". Although the association deeded the cemetery to the city in 1927, a perpetual care fund was created and the women's auxiliary continued to oversee operations. Fairmount Cemetery's 52 acres contain more than 33,000 burials, some of which were transferred from other area graveyards. Interred here are former slaves; African American Buffalo Soldiers; pioneer ranchers and oilmen; civic leaders; and veterans of wars ranging from the Texas Revolution to the Vietnam conflict including Lt. Jack Mathis, recipient of the Congressional Medal of Honor for service in the European Theater in World War II. Members of a local Greek Orthodox Church are buried in a separate section. Among the cemetery's outstanding statuary is the statue of Tom McCloskey by noted sculptor Frank Teich and one of St. Francis shaped by Italian artisans.
Andrew Butler Photos
Powered by ZENFOLIO User Agreement
Cancel
Continue