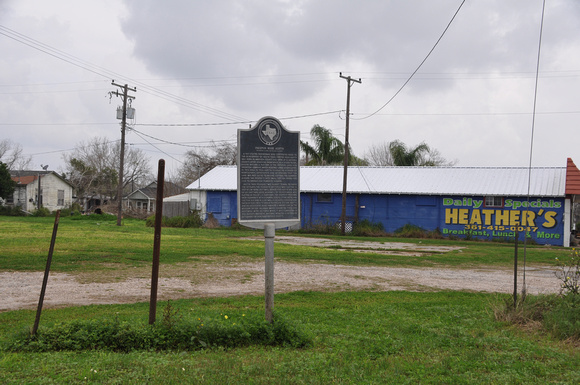 Tivoli
Refugio County, Texas
28 27.307' N 96 53.285' W
Directions: Start at the intersection of Main Street and Austwell Road. The marker is on the northwest corner of the intersection.

Text: (November 11, 1872 - September 29, 1929) A far-sighted businessman who contributed much to the development of South Texas, Preston Rose Austin was born in Harrison County and grew up in Victoria County. After achieving prominence as a stock raiser, Austin became a partner in the Refugio Land and Irrigation Company, which acquired large landholdings in this area in 1902. Austin conducted a series of agricultural experiments and determined that the land was best suited to raising cotton. The company divided the property into small cotton farms for sale to German and Bohemian farmers. Austin then founded two market towns to serve the settlers. The townsite of Tivoli was platted in 1907 by J.W. Ward. Austwell, named for Austin and one of his partners, Jesse McDowell of Pennsylvania, was platted in 1912 by L.A. Gueringer. The company provided each community with a church, school, store, hotel, and cotton gin and mill, as well as modern conveniences such as electricity and a telephone system. Austin and his associates also financed a branch line of the Missouri Pacific Railroad, which connected Tivoli and Austwell with Victoria when it was completed in 1912. Austin's energetic ventures resulted in extensive settlement of northern Refugio County.
(An identical marker exists in Austwell)
Andrew Butler Photos
Powered by ZENFOLIO User Agreement
Cancel
Continue