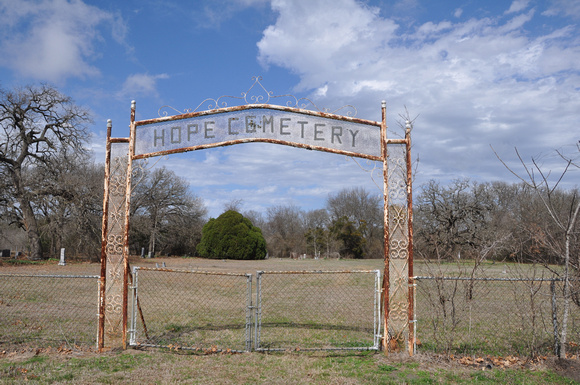 Historical Marker: Falls County Judge W. R. Reagan, pioneer school teacher, gave this 10-acre site in 1873 to Hope Baptist Church for a meeting, school, and burial ground. The 61-member fellowship under the pastorate of the Rev. J. J. Davis erected a sanctuary to serve the "Spunky Flat" area. The first grave in the cemetery after 1873 was that of a young girl whose family was traveling through the region. Over the plot they built a small house which washed away in a flood. The first marked site, dated 1874, is that of Alma Etta Watters. A summer revival conducted in 1921 under an arbor revitalized the congregation, and for several years the prayer meetings continued to draw large crowds. As residents moved to cities and young men went into military service in World War II, the membership declined. IN 1943 the last service was conducted. The sanctuary was destroyed by fire in 1966. In the early years relatives and friends provided maintenance for the burial ground. Hope Cemetery Association was organized in 1974 and a tabernacle was constructed five years later. The graveyard, with 104 marked sites and many unmarked plots, continues to serve the area.
Andrew Butler Photos
Powered by ZENFOLIO User Agreement
Cancel
Continue