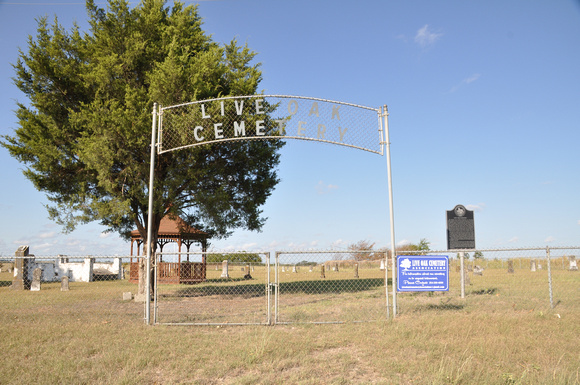 Historical Marker The pioneer Falls County community of Live Oak began shortly after the Civil War. Originally known as Camden and later as Rupee, the settlement was the site of stores, a cotton gin, post office, doctors and a Masonic lodge. The Live Oak Baptist Church was established in the early 1870s. A log cabin served as the sanctuary and was also used as a schoolhouse. Land for the church, school and this community cemetery was donated by brothers George and E. R. Hodges, sons of pioneer area settler Homer Hodges. The earliest marked graves in the burial ground date from 1877 and are inscribed with the names Ida May and Mary T. Other graves here include those of E. R. Hodges (1840-1905) and members of his family; Pinkney Pulaski Hodges (1813-1895) and his descendants; prominent community leaders J. J. Hodges (d. 1918) and his son Bradley (d. 1961); and members of the pioneer Vinson and Jordan families. Live Oak began to decline in the 1890s when the area was bypassed by rail lines. The Baptist Church closed and the school was consolidated with the Lott district. Only the pioneer Live Oak Cemetery remains to mark the site of the early agricultural settlement.
Andrew Butler Photos
Powered by ZENFOLIO User Agreement
Cancel
Continue