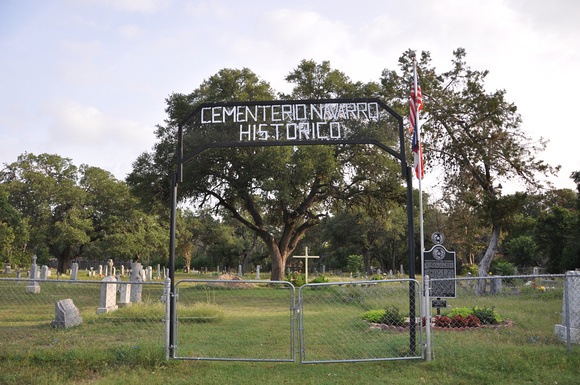 Text: Also known as the Mexican Cemetery, this burial ground has served the Mexican-American community of Lockhart since around 1900. The earliest dated burial here, of area settler Severiano Sanchez, dated to 1901. Since that time, the cemetery has served primarily Hispanic and Roman Catholic residents. A number of community leaders are interred here. Others, including business owners, farmers, laborers, ranchers, teachers, and veterans of foreign conflicts dating to World War I, are also buried here. Several graves are marked by Woodmen of the World monuments, which led to the burial ground also being known as the Woodmen of the World Cemetery or Paneon de los Hacheros. Other features in the cemetery include vertical stones, plot curbing and grave slabs. In 2005, descendants of the interred formed the Cemeterio Navarro Association to restore and maintain the burial ground. The association named this tie Cemeterio Navarro Historico after the noted Tejano statesman and signer of the Texas Declaration of Independence, Jose Antonio Navarro. The cemetery is also near the site of the old Navarro Elementary School, which was known historically as the Mexican school. Today, Cemeterio Navarro Historico continues to serve descendants of those buried here. It remains a chronicle of the Mexican-American pioneers of Caldwell County and a testament to the difficult and laborious circumstances under which they settled and thrived.
Andrew Butler Photos
Powered by ZENFOLIO User Agreement
Cancel
Continue