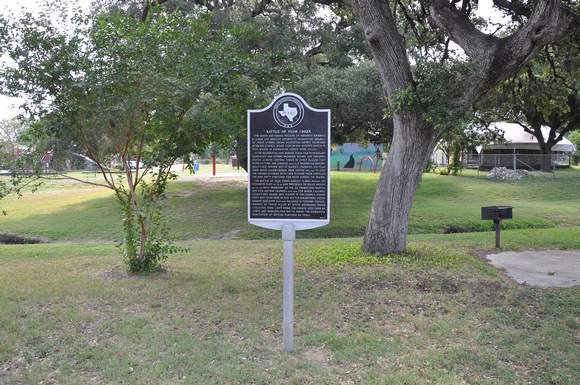 Text: The harsh anti-Indian policies of President Mirabeau B. Lamar and Mexican efforts to weaken the Republic of Texas stirred Indian hostilities. Hatred increased after the Council House Fight in San Antonio, March 19, 1840, where 12 Comanche chief were killed. After regrouping and making plans for revenge, 600 Comanches and Kiowas, including women and children, moved across central Texas in early August. They raided Victoria and Linnville (120 mi. SE), a prosperous seaport. About 200 Texans met at Good's Crossing on Plum Creek under Major-General Felix Huston (1800-1857) to stop the Indians. Adorned with their plunder from Linnville, the war party stretched for miles across the prairie. The Battle of Plum Creek, August 12, 1840, began on Comanche Flats (5.5 mi. SE) and proceeded to Kelley springs (2.5 mi. SW), with skirmishes as far as present San Marcos and Kyle. Mathew Caldwell (1798-1842), for whom Caldwell County was named, was injured in the Council House fight but took part in this battle. Volunteers under Edward Burleson (1793-1851) included 13 Tonkawa Indians, marked as Texan allies by white armbands. Texan casualties were light while the Indians lost over 80 chiefs and warriors. This battle ended the Comanche penetration of settled portions of Texas.
Andrew Butler Photos
Powered by ZENFOLIO User Agreement
Cancel
Continue