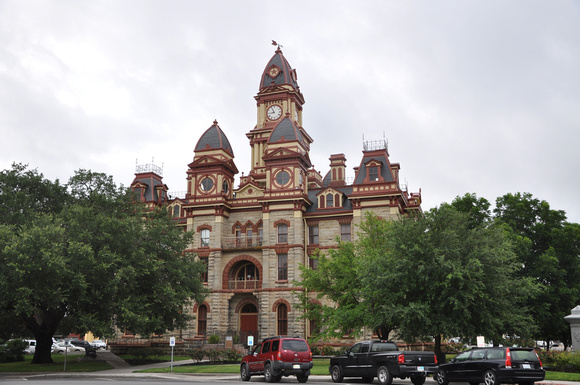 Text: The first Caldwell County Courthouse was erected on this site in 1848, when the county was organized and named for Mathew Caldwell, a Texas Ranger and signer of the Texas Declaration of Independence. It was replaced in 1858 by a 2-story limestone edifice, measuring 65 feet by 40 feet, with six offices and two rooms for storing records. By 1893, that building had become too small for a growing county. In April 1893, Judge George W. Kyser and commissioners J. H. Jolley, g. A. McGee, C. R. Smith, and R. A. Tiller approved plans for the present courthouse. The cornerstone was laid by Lockhart Lodge No. 690, A. F. & A. M., on August 15, 1893. Contractors Martin, Byrne, and Johnston completed the building on March 19, 1894. The 3-story structure is built of sandstone with red sandstone trim. It displays the fine workmanship and elaborate detail common to architecture of the period. the mansard roof is characteristic of the second empire style that was often used for public buildings. The courthouse is topped by a central clock tower, with additional towers at each corner and flanking the north and south entrances. When it was built, the structure was equipped with the latest conveniences of the day, including electricity.
Andrew Butler Photos
Powered by ZENFOLIO User Agreement
Cancel
Continue