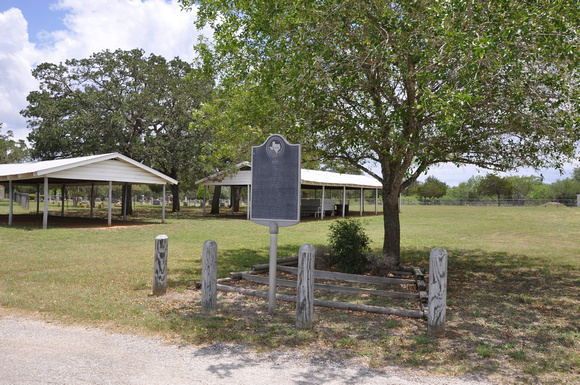 Text: The earliest known permanent settlers in this area were Orrin L. and Susannah Winters and their extended family. By 1873, enough of a settlement existed to make application for a U. S. Post Office. Postal officials rejected the first name selected for the community, Iron Mountain, but accepted the second name, Delhi. According to local tradition, Delhi was the name of a traveling salesman who stayed in the area for a time dispensing patent medicines and providing entertainment for the settlers. John P. Reid served as first postmaster. The first store in Delhi was in operation by the early 1870s in the home of Daniel t. Winters. The Delhi community experienced some growth in the 1880s with the founding of two churches, a school, and two cotton gins. Over the years, additional businesses, including a blacksmith shop, casket shop, and a syrup mill have served the community. Although the post office closed in 1929 and the public school consolidated with the McMahan district in 1947, Delhi remains a strong rural community in eastern Caldwell county. Many of its residents are descendants of the town's pioneer families.
Andrew Butler Photos
Powered by ZENFOLIO User Agreement
Cancel
Continue