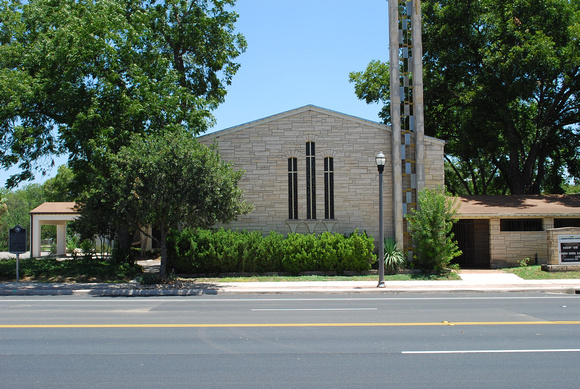 Text: The Western Texas Presbytery assigned the Rev. James R. Bridges to the Uvalde field in 1881. Serving Bandera, Brackettville, Del Rio, Montell and the Nueces and Frio Canyon areas, Bridges found Uvalde and especially its surrounding areas wild and often dangerous. However, he soon met Presbyterian families who were anxious to organize a new church. William and Mattie Jones and their six children, also new arrivals to the area, helped the young minister gather charter members and organize the church. In February 1882, the Rev. Mr. Bridges and eleven charter members met in Uvalde and organized the Uvalde Presbyterian Church. The Presbyterians met in the Methodist church building while funds were raised for a meeting house of their own. The new building was dedicated in 1883, the same year that Bridges was called to serve in Baltimore. A windstorm destroyed the church building early in the 20th century, and a new facility was built in 1907. In 1909, the Rev. Thomas Alexander Hardin of Tennessee became minister of the Uvalde church. His arrival ended years of uncertainty for the church and began an era of stability. The 1907 church building was moved to this site in 1914. A ladies' group, later called the Women's Auxiliary, was in operation by 1921. Ill health compelled the Rev. Mr. Hardin to retire in 1933; he was pastor emeritus until his death in 1946. The church grew in numbers despite the difficulties of World War II. A men's group began in 1947. In the 1950s and early 1960s a new church complex was completed. The church has remained active in community service and worship, growing steadily since that time.
Andrew Butler Photos
Powered by ZENFOLIO User Agreement
Cancel
Continue