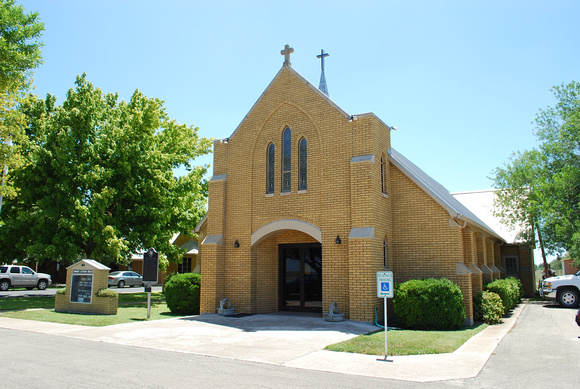 Text: This church traces its origins to 1904 when nine charter members led by the Rev. Gottlieb Langner organized a congregation in Knippa. Services were held in the homes of its members, who were served by area pastors and traveling missionaries. George Knippa, for whom the town was named and a charter member of the church, died in 1905. The land he donated in his will to be used for a Lutheran Church was exchanged for this church site. A wooden church with a 67-foot bell tower was built in 1910. Pastor Langner became the first full-time pastor in 1912, organizing a Sunday School and choir. The German-speaking congregation conducted its services in German. During World War I, a Uvalde County resolution prohibited the use of the German language. Challenged and appealed to the U.S. Supreme Court in 1918, the court ruled it was a matter for the church to decide. German was spoken in church until 1942. A new sanctuary was constructed for the growing congregation, and was dedicated on the 50th anniversary of the church's founding in 1954. A new parsonage, annex and fellowship hall were later added. This church continues to serve its membership and the community as it has for more than 90 years.
Andrew Butler Photos
Powered by ZENFOLIO User Agreement
Cancel
Continue