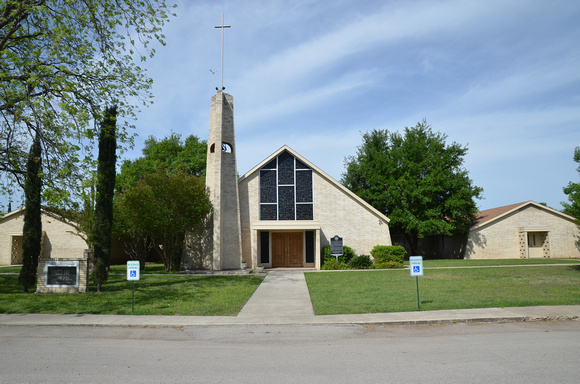 Sabinal
Uvalde County, Texas
29 19.367' N 99 28.120' W
Directions: Start at the intersection of Peters Avenue and San Antonio Street. The church is on the northwest corner of the intersection.

Text: Since 1899, First Baptist Church has served the community of Sabinal. It began as Sabinal Missionary Baptist Church with eight charter members: William J.F. and Mary Lou Millikin; C. Manco and Martha E. Cullins; Mae Holme; Monroe and Sarah V. Dunlap; and Bessie Dunlap. Led by the Rev. Winter Green, the congregation worshipped once a month in its early years, meeting in the Progressive Campbellite Building and later the Wilson Theatrical Hall. Members completed construction of the first church facility at Tyler and Austin Streets in 1905. Membership grew steadily in the early years, and in 1927 the church moved to a new structure on U.S. Highway 90 (at present FM 127). First Baptist Church has a rich tradition of charitable service to others. Since its inception, members have focused on programs for children and the needy, also giving aid in times of crisis and supporting both foreign and home mission efforts. The congregation supported a local Spanish-speaking mission in the 1930s and in 1984 established a mission in nearby Concan that later developed as a separate church. The First Baptist Church of Sabinal has also been active in interdenominational activities in the community. In 1977, the First Baptist Church moved again, completing work on the current sanctuary. Today, it continues to provide vital leadership, emphasizing mission work on the international level while still serving locally to adress spiritual needs for residents of the Sabinal area.
Andrew Butler Photos
Powered by ZENFOLIO User Agreement
Cancel
Continue