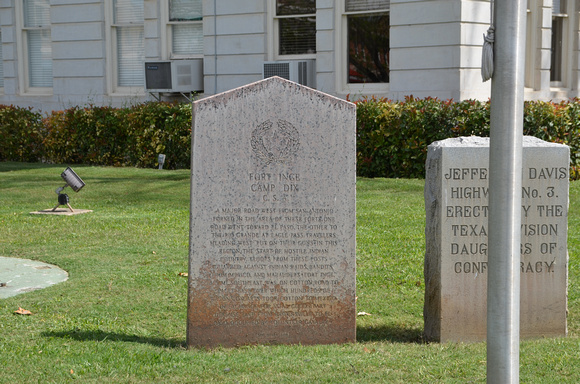 Uvalde
Uvalde County, Texas
29 12.587' N 99 47.168' W
Directions: Start at the intersection of Main Street and Getty Street. The marker is on the northwest corner of the intersection.

Text: A major road west from San Antonio forked in the area of these forts. One road went toward El Paso, the other to the Rio Grande at Eagle Pass. Travelers heading west "put on their guns" in this region, the start of hostile Indian country, troops from these posts guarded against Indian raids, bandits from Mexico, and marauders. Fort Inge, 4.5 mi. southeast, was on Cotton Road to Eagle Pass over which hundreds of wagons, oxcarts took cotton to Mexico in exchange for vital goods. Part defense line from Brownsville to El Paso. Occupied by volunteer cavalry. (Back of Fort Inge, Camp Dix) Camp Dix, located 7 mi. East. Established in 1862. Part of state frontier defense line a day's horseback ride apart from the Red River to the Rio Grande to protect frontier settlements. Occupied by Texas Frontier Regiment. Although Uvalde County voted 76 to 16 against secession, a number of men joined the Confederate Army. Some, being Unionists, moved to Mexico. The war brought hard times and a rash of Indian attacks. In 1863-64 when Federals held the lower Rio Grande, Eagle Pass became the chief export city for the Confederacy and wagon trains increased along the road. Often without food, clothing, horses, ammunition, the Confederate and State troops, backed by citizens' posses brought a measure of protection to this frontier region. A memorial to Texans who served the Confederacy.
Andrew Butler Photos
Powered by ZENFOLIO User Agreement
Cancel
Continue