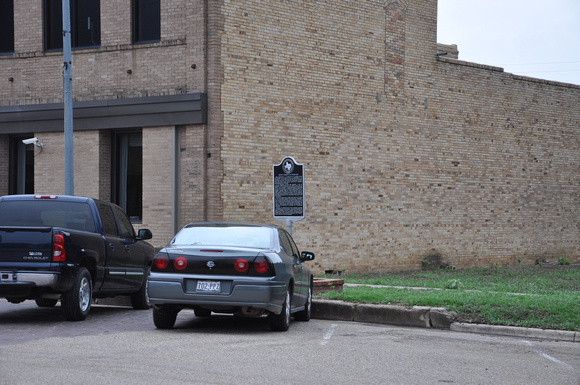 Text: Area landowners A. S. Fischer and W. C. Belcher platted the townsite of Granger in 1884, in anticipation of its potential to develop along the rail line that had been laid two years previously. The town plan called for a 100-foot-wide main street, named Davilla, along which businesses and dwellings soon appeared. By 1910 Granger's economy was booming. It was an important cotton marketing and shipping point for the region, with a combined cotton compress and cottonseed oil mill, an ice factory, a waterworks, churches, banks and schools. The vast expanse of Davilla Street proved to be a problem, however, especially after rainstorms when the street became a colossal mud puddle. With the increasing popularity of the automobile, the issue of Davilla Street was even more pronounced, and the decision was made to pave it with bricks. The job of paving Davilla Street took place in the summer of 1912. The weekly Granger News proclaimed, "Granger is said to boast the distinction of being the only city in the state of less than 5000 inhabitants that has paved streets, or that is paving them." The Business League of Granger held annual "good roads and pavement celebrations" to continue its promotion of Granger as a progressive community. Ironically, the proliferation of the automobile diminished the importance of the railroad, upon which Granger had based its prosperity, and the community began to lose its population to larger cities and towns. The remaining brick streets continue as a reminder of Granger's early prosperity and its role as a center of commerce.
Andrew Butler Photos
Powered by ZENFOLIO User Agreement
Cancel
Continue