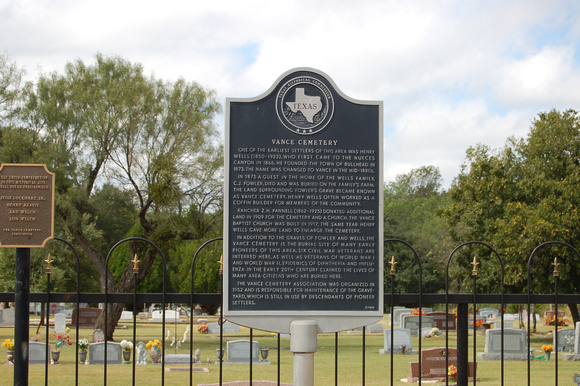 Text: One of the earliest settlers of this area was Henry Wells (1850-1923), who first came to the Nueces Canyon in 1866. He founded the town of Bullhead in 1873. The name was changed to Vance in the mid-1880s. In 1875 a guest in the home of the Wells Family, C. J. Fowler, died and was buried on the family's farm. The land surrounding Fowler's grave became known as Vance Cemetery. Henry Wells often worked as a coffin builder for members of the community. Rancher Z. H. Pannell (1862-1925) donated additional land in 1909 for the cemetery and a church. The Vance Baptist Church was built in 1917, the same year Henry Wells gave more land to enlarge the cemetery. In addition to the graves of Fowler and Wells, the Vance Cemetery is the burial site of many early pioneers of this area. Six Civil War veterans are interred here, as well as Veterans of World War I and World War II. Epidemics of diphtheria and influenza in the early 20th century claimed the lives of many area citizens who are buried here. The Vance Cemetery Association was organized in 1952 and is responsible for maintenance of the graveyard, which is still in use by descendants of pioneer settlers.
Andrew Butler Photos
Powered by ZENFOLIO User Agreement
Cancel
Continue